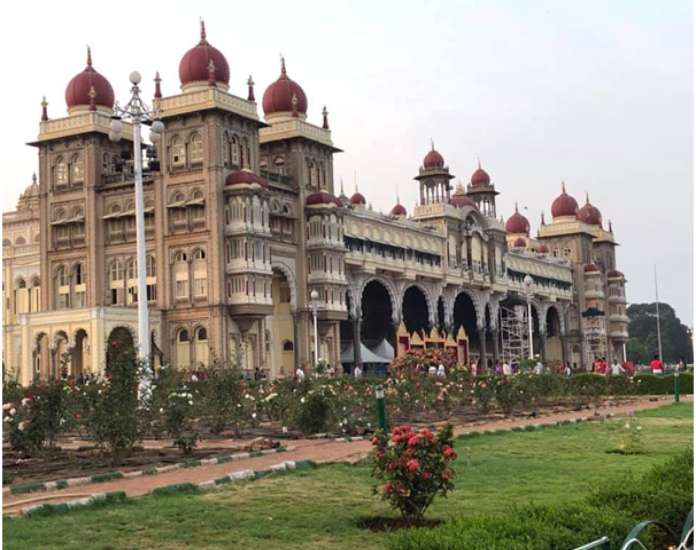 Mysuru is a lovely city with cooler temperature, not so crowded and colonial era buildings all around (now used as government offices and educational buildings).

Since we had only a day in our hand, we decided to take a tour bus next day which was supposed to take us to all the tourist places including Sri Chamundeshwari Devi temple which was on Chamunda hills (13 kms from Mysuru city).

We soon realised taking a tour bus was probably not a wise decision as they covered all the sites however not necessarily giving enough time to explore them at our pace.

We also visited a town Srirangapatana which was Tipu Sultan’s capital near Mysuru. We were shown Tipu Sultan’s fort, where he was killed by British Army and his summer palace all in ruins now.

Chamundeshwari temple was very crowded and took almost three hours to get a darshan. The highlight of the tour day was a breathtaking Mysuru palace.

The Palace is built in the Indo-Saracenic style with a touch of Hindu, Mughal, Rajput, and Gothic architectural styles. The palace was built by Maharaja Krishnaraja Wodeyar IV and was designed by the British architect Henry Irwin.

The grandiose of the palace and a beautiful architecture amazed everyone visiting this palace.  We bought tickets to visit inside the palace and the intricate designs on its pillars, ceilings and windows were feast to our eyes.

In the evening, we also took a horse carriages ride on the roads around the Mysuru palace which kids enjoyed thoroughly.

We also visited the Brindavan Gardens which is situated in Mandya district and spread in an area of 60 acres beside the Krishnarajasagar dam across the Kaveri River.

We arrived at the garden in twilight when all the evening lighting and the musical fountains were in action. Overall the Mysuru was a beautiful city and we created some lovely memories here.