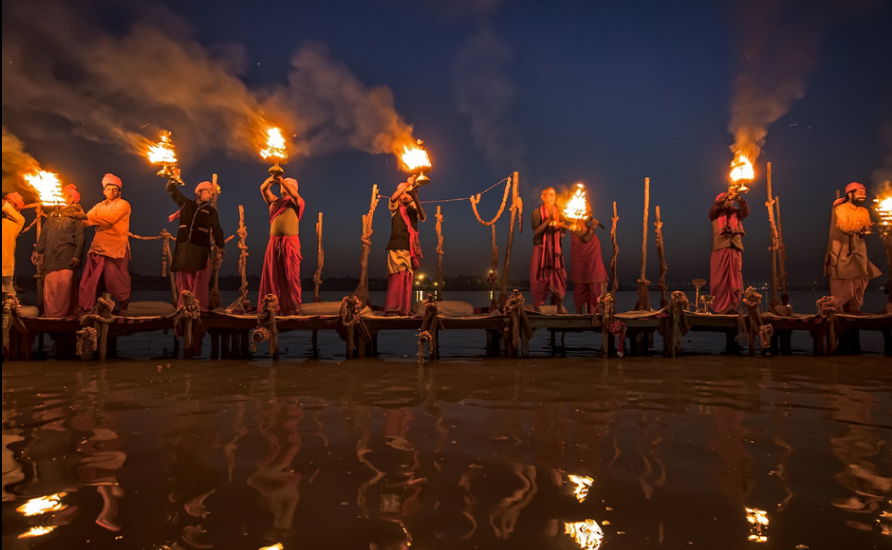 The Kumbh Mela is the largest public gathering and collective act of faith, anywhere in the world. The Mela draws tens of millions of pilgrims over the course of approximately 48 days to bathe at the sacred confluence of the Ganga, the Yamuna, and the mystical Sarasvati. Primarily, this congregation includes Ascetics, Saints, Sadhus, Sadhvis, Kalpvasis, and Pilgrims from all walks of life.

The Kumbh Mela is the biggest religious congregation in the world.

India’s Kumbh Mela has been recognized by the United Nations Educational, Scientific and Cultural Organization (UNESCO) as an “Intangible cultural heritage of humanity” and held up as the world’s largest peaceful gathering of pilgrims.

In continuation of the astrological calculation, the event of Kumbh takes place as per the following astrological positions

Kumbh Mela, in Hinduism, is a religious pilgrimage that is celebrated four times over a course of 12 years. The geographical location of Kumbh Mela spans over four locations in India and the Mela site keeps rotating between one of the four pilgrimages on four sacred rivers as listed below

1.Haridwar on the Ganges in Uttarakhand

2.Ujjain on the Shipra in Madhya Pradesh

3.Nashik on the Godavari in Maharashtra

4.Prayagraj at the confluence of the Ganges, the Yamuna, and the mythical Sarasvati in Uttar Pradesh,

Pilgrims to the Kumbh Mela come from all sections of the religion ranging from Sadhus (saints) and Naga Sadhus who practice ‘sadhana’ and keenly follow a strict path of spiritual discipline, to Hermits who leave their seclusion and come to visit the civilization only during the Kumbh Mela, to seekers of spirituality, and to common people practicing Hinduism.

During the Kumbh Mela, a number of ceremonies take place; the traditional procession of Akharas called ‘Peshwai’ on elephant backs, horses and chariots, the shining swords and rituals of Naga Sadhus during ‘Shahi Snaan’, and many other cultural activities that attract millions of pilgrims to attend the Kumbh Mela.

The story of Samudra Manthan,

one of the best-known episodes in the Hindu mythology, narrated in the Bhagavad Purana states that the sacred alignments of celestial bodies directly relate to the Kumbh festival. It took 12 divine days to carry the Amrit to the heavens. As one divine day of Gods is equivalent to one year of the humans, the journey to the heavens symbolizes 12 years in human terms.Mythological studies suggest that the Kumbh festival and the Ganga are related to each other.

Apart from its primary bathing rituals, the social aspect of the festival also revolves around the various Yajnas, the chanting of Vedic Mantras, holy elucidations, traditional dances, devotional songs, programs based on mythical stories, and prayers.

Kumbh has been spiritually uniting the people of India and across the world since time immemorial and will continue doing so for years to come.


Akharas are a symbol of social order, unity, culture, and ethics. Their main objective is the establishment of spiritual values in society.

The favored deity is Lord Shiva. They worship Lord Shiva in various forms based on the specific beliefs and ideologies of their organization.

Chandra Dev, the son of the first guru of the Sikh community is considered as the founder of the Udaseen Akhara. Followers of this sect principally offer their adulations to ‘ॐ’.

Lord Vishnu is the favored deity of this sect. They worship Lord Vishnu in various forms based on the specific beliefs and ideologies of their organization.

Do visit Vrindavan also for a better understanding of Indian Culture.

5 Replies to “Kumbh Mela: The flow of humanity”